Episode 139: The Alexa Conjecture [Run All Night; The Duke of Burgundy; Suite Francaise] 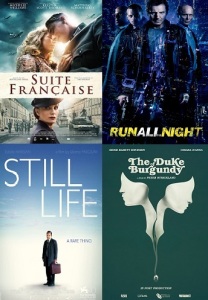 This week the Red Light District returns, bringing news of films from the fifties, a World Cinema classic from Scandinavia, and digressions involving Maria Schell, Ava Gardner, and Otto Preminger. We have reviews of the latest Jaume Collet-Serra/Liam Neeson project “Run All Night,” wartime romance “Suite Francaise,” and meditative drama “Still Life,” while one of us was more prepared than the other for the Sapphic shenanigans in Peter Strickland’s “The Duke of Burgundy.” Elsewhere, Pete’s fondness for Sidse Babett Knudsen goes into overdrive, Cal feels guilty for a second consecutive snub of Matthias Schoenaerts, and we’re all about the Arri Alexa.

Red Light District: Pimping the best old films we’ve seen in the past month, featuring discussion of “Gervaise,” “Pelle the Conqueror,” and “The Smallest Show on Earth”

Outro Music: Melanie B, “Tell Me”

Despite Pete’s efforts toward the contrary, this week’s episode is our longest yet, as we dig into our year-end awards, disclosing more than a little about our favourite films and performances. We also react to this past Sunday’s Academy Awards, measuring “Birdman” up against the Best Picture winners of the past and speculating about how its leading man couldn’t also sail to victory. The week’s reviews include time travel thriller “Predestination,” starring podcast favourite Ethan Hawke, Jennifer Aniston’s failed Oscar bid, “Cake,” and Michael Mann’s latest procedural drama “Blackhat,” which one of us walked out on. Meanwhile, Anna Kendrick is – quite literally – a vision, there’s an appearance from Gloria Gaynor, and Pete has an abrupt apology for one of last week’s performers after omitting her from The Pootsition.

Closing Segment: Revealing our top ten films of 2014, and discussing our favourite performances (in quite a bit of depth)!

[1:25:12]
You can Listen online
or Download MP3
(Right click… save as)
It’s Episode 94 of In the Mood for Podcast, a British-based film podcast hosted by Calum Reed of Ultimate Addict and Pete Sheppard of In the Mood for Blog.
Those tired of our sports banter may rejoice this week as we forego our usual sporty opening, instead heading on a tangent about the horrific state of 1994’s Best Actress Oscar race, and yet another aside involving the Dardennes brothers. This week’s episode sees us largely catching up with smaller films, as we tackle family drama “The Fold,” science-fiction horror “Last Days on Mars,” and John Michael McDonagh’s Catholic whodunit “Calvary.” Cal dishes all on the culinary allure of Indian romance “The Lunchbox,” before we react to the slew of cameos in the new Muppet movie, “Muppets Most Wanted,” which sadly lacks the presence of Amy Adams this time around. Elsewhere, tune in to find out what Pete’s Annette Bening moment of the week was, whose bohemian attire caused this week’s Huston Problem, how Linford Christie’s manhood and the cast of “Magic Mike” could have spiced up one of this week’s films, and which leading males bear the brunt of our wrath when we discuss the Academy’s worst ever choices for Best Actor. “Cat Ballou” fans: stay away!

[1:27:46]
You can Listen online
or Download MP3
(Right click… save as)
It’s Episode 89 of In the Mood for Podcast, a British-based film podcast hosted by Calum Reed of Ultimate Addict and Pete Sheppard of In the Mood for Blog.
In this week’s episode we finally put 2013 to bed with discussion of Sunday’s Oscar ceremony, which features theories on how rule changes may have helped a certain Italian film, and when on earth Amy Adams will get her moment in the sun. A listener question turns our attention to acting winners of years gone by, while we review airborne mystery/thriller “Non-Stop,” the first part of the racy “Nymphomaniac,” and Akiva Goldsman’s bewildering “A New York Winter’s Tale.” We have our say on holocaust drama “The Book Thief,” but did its Oscar-nominated score make as much impact on us as its intermittent voice-over? Plus: listen to find out how Uma Thurman is channelling Gena Rowlands this week,  why Lars Von Trier’s use of Shostakovich is questionable, and a story from Pete about how unwelcome ‘entertainment’ almost turned nasty. It’s all about the badinage.

Opening Segment:
Discussing the winners of this year’s Academy Awards, plus a listener question!