Special Episode: Best of the Podcast, Year 3
[57: 58]
You can Listen online
or Download MP3
(Right click… save as)
It’s a special episode of In the Mood for Podcast, a British-based film podcast hosted by Calum Reed of Ultimate Addict and Pete Sheppard of In the Mood for Blog.

It’s been three long years and the podcast is still going, so sit back and listen to a compilation of our past year of putdowns, innuendo, and general banter. For those unfamiliar with the podcast, we do discuss films with intelligence and depth, and sometimes even like them, but none of that seemed as entertaining as Pete’s homoerotic plot rundown of “The Giver,” Cal’s unexpected remark about Jodie Foster, or our dissection of Roger Ebert’s anecdotal “Memoirs of a Geisha” review. Anyway, enjoy!

Episode 138: Bemoaning the Mullet [Chappie; White Bird in a Blizzard; Kill the Messenger] 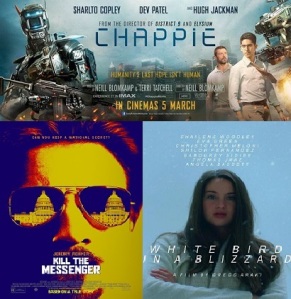 In our 138th effort, we managed to keep this episode to a reserved sixty four minutes, allowing for discussion of Gregg Araki’s latest take on adolescence, “White Bird in a Blizzard,” Jeremy Renner as a crusading journalist in “Kill the Messenger,” while Cal revealed whether “Chappie” is as bad as the trailer (and most of the reactions to the film) suggests. It’s fair to say that this week’s slate of films leave a lot to be desired, but we try and find the positives as best we can. Elsewhere, the UK’s Eurovision entry fails to get us excited, we discuss the litany of queer roles for the actors of 2005, Neill Blonkamp’s recent fascination with female villains leads to an unexpectedly crude remark about Jodie Foster, and Hugh Jackman’s radical hairstyle rocks the Gauge.

Outro Music: Carly Rae Jepsen, “I Really Like You”

[1:32:16]
You can Listen online
or Download MP3
(Right click… save as)
It’s Episode 96 of In the Mood for Podcast, a British-based film podcast hosted by Calum Reed of Ultimate Addict and Pete Sheppard of In the Mood for Blog.
This week is especially sweet for Pete, as Rebecca Hall features in two very different releases: Wally Pfister’s ambitious Sci-fi project “Transcendence,” and Patrice Leconte’s reserved romantic drama “A Promise.” Despite general dread at the prospect of Jason Reitman’s “Labour Day,” Cal managed to catch it, but did he find something of worth besides an appreciation for Diane Lane’s taste in men? We both saw “The Amazing Spider-Man 2,” of which there are fairly lengthy preconceptions, and elsewhere we discuss some relationship news, an odd piece of casting, and the eclectic competition jury for this year’s Cannes Film Festival. Tune in to find out why Cal is on particularly grumpy form, how many times Pete had to recount the plot of “Transcendence” in order to perfect it, and our potentially epic plans for our upcoming 100th episode!

Episode 63: Puzzling Downfalls
[1:29:11]
You can Listen online
or Download MP3
(Right click… save as)
It’s Episode 63 of In the Mood for Podcast, a British-based film podcast hosted by Calum Reed of Ultimate Addict and Pete Sheppard of In the Mood for Blog.
Peroni comes out to play in this week’s episode, as Pete prepares for his impending flight to Venice by cracking open a bottle or two and lays into some usual suspects, including Nicolas Winding Refn and Kate Hudson. Cal saw Jennifer Aniston bare all in “We’re the Millers” and Amanda Seyfried get it all out in “Lovelace,” and reveals a risqué podcast game to test Pete’s knowledge of steamy film scenes. We review Nell Blonkamp’s sci-fi spectacle “Elysium,” which features some remarkable performances, and welcome Julianne Moore’s return to the podcast in “What Maisie Knew.” All that, plus an epic news segment, some banter about Glenn vs. Sigourney in 1988, and discussing how nobody can quite remember what Ruby Dee’s two lines were in “American Gangster.”

The Week’s News, featuring discussion of Miley Cyrus’ performance at the VMAs, the casting of Ben Affleck as Batman, and the death of Julie Harris, among other things!  [1:55 – 15:10]