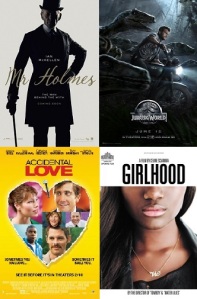 We’re back this week with a packed episode, as we get around to tackling the record-breaking blockbuster “Jurassic World” and the latest collaboration between Bill Condon and Ian McKellen, “Mr. Holmes,” while some interesting news items get us chattering about Kristen Stewart’s sexuality and Ingrid Bergman’s past indiscretions. We pay tribute to the late James Horner by discussing some of our favourite work of his, Cal reviews Celine Sciamma’s latest coming-of-age tale “Girlhood,” and trepidation for the the heavily-delayed and part-disowned “Accidental Love” is tested when we review David O. Russell’s foray into the world of political satire. Meanwhile, Cal has caught up with a British Springtime hit and one of Harvey Weinstein’s Oscar hopes, Pete is distinctly unimpressed with Vincent D’Onofrio’s military mindset, and Laura Linney’s stab at a regional English accent goes down like a lead balloon.

Episode 62: Nights to Forget
[1:19:22]
You can Listen online
or Download MP3
(Right click… save as)
It’s Episode 62 of In the Mood for Podcast, a British-based film podcast hosted by Calum Reed of Ultimate Addict and Pete Sheppard of In the Mood for Blog.
This week’s episode features two epic tales of unfortunate evenings, as Pete takes the role of storyteller for a missed flight debacle and a drunken car-key faux pas. We give our verdict on a night from hell for the characters in wedding comedy “Bachelorette,” and dig into the viability of the politics in Scandinavian prostitution procedural “Call Girl.” Cal went to bat for the rampant action comedy “2 Guns,” and Iain Softley’s welcome return to directing, “Trap for Cinderella,” while Pete (surprise, surprise) was this week’s Bollywood correspondent by opting for Indian smash hit “Chennai Express.” Illness brings out Cal’s Kathleen Turner voice for a podcast reprise, while we lambast the academy for their 1997 shortcomings and look ahead to Julianne Moore’s ‘In the Mood’ debut next week.

The Week’s News, featuring discussion of Harrison Ford’s latest box-office bomb, and the prospect of a possible Ben-Hur remake, plus Pete’s epic story about losing his car keys [0:55 – 6:25]

But for some football-related rants this week’s episode is surprisingly concise, as we turn our attention towards legacies. As Steven Soderbergh prepares to fold up his chair and retire (we’ll believe it when we see it) after his final film “Side Effects,” we reveal whether we think his pharmaceutical thriller is a worthy swansong, and offer our favourite examples of final films from directors. Sam Raimi is resurrecting L. Frank Baum’s series of Oz books with “Oz the Great and Powerful,” but can this kaleidoscopic 3D adventure even come close to replicating the magic of the original? And will Barbra Streisand’s Razzie-nominated return to acting in “The Guilt Trip” affect her long-standing reputation as a Queen among actresses? We have reviews of Jason Statham vehicle “Parker,” the acclaimed British thriller “Broken,” and Pete’s precious “Robot & Frank,” while we assess the power of Bette Midler’s Oscar-nominated performance in “The Rose” and look ahead to Sofia Coppola’s latest foray into the perils of youth, “The Bling Ring.” Sit back and listen to us bitch!