Episode 144: From Maasai Mara to Agent Provocateur [Avengers: Age of Ultron; The Good Lie; The Falling] 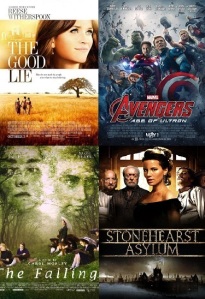 This week there’s some festival fever, with the upcoming Cannes Film Festival generating fervour abroad, and Derby’s incarnation providing some local interest. We split the reviews segment, as Pete was there for Marvel’s huge sequel to “The Avengers” and Carol Morley’s acclaimed period drama “The Falling,” while Cal caught the gothic thriller “Stonhearst Asylum” and his favourite, Reese Witherspoon, in immigrant tale “The Good Lie.” Elsewhere, we talk about a couple of deaths in the film community, which instigates a discussion of cinematography in the early Noughties, there’s been drama on the set of the new Adam Sandler film, and the return of Greta Scacchi leads to a bit of a love-in. Tune in to discover what Xavier Dolan’s huge faux-pas might have been, which Avengers actress does not survive The Pootsition, and why Reese Witherspoon’s underwear was somewhat of an issue for Cal.

The Pootsition
The Garrett Gauge

Episode 99: The Changing of the Guard [Godzilla; Two Faces of January; In Secret]

Episode 99: The Changing of the Guard

[1:25:59]
You can Listen online
or Download MP3
(Right click… save as)
It’s Episode 99 of In the Mood for Podcast, a British-based film podcast hosted by Calum Reed of Ultimate Addict and Pete Sheppard of In the Mood for Blog.
This week marks the end of an era, as we announce who will take over from Emma Watson and Melvil Poupaud in our factor and range segments, so tune in to find out which delectable actor and actress will assume the baton. It’s a week of good cast lists, as the latest blockbuster incarnation of “Godzilla” managed to assemble a who’s who of Thespian talent (if you discount Aaron Taylor-Johnson), and we review period thriller “The Two Faces of January,” despite not having a clue why it’s titled as such. Cal goes it alone for “Concussion,” the sapphic answer to “Belle De Jour,” which Pete took as a cue to go into innuendo overdrive, while love triangle melodrama “In Secret” instigates fierce preconceptions about Jessica Lange. A recent death in the cinematography world leads to a digression about the best shot films of 1990, a discussion of anti-heroes turns into an analysis of category placement politics, plus the Huston problem rears its ugly head to plague one of our new replacements.

Closing Segment: Our take on Gareth Edwards’ “Godzilla,” and discussing the history of anti-heroes in cinema!

[1:25:49]
You can Listen online
or Download MP3
(Right click… save as)
It’s Episode 98 of In the Mood for Podcast, a British-based film podcast hosted by Calum Reed of Ultimate Addict and Pete Sheppard of In the Mood for Blog.
This week starts out sporty, as we look ahead to next month’s World Cup, and celebrate the release of new underdog football film “Next Goal Wins” by revealing our favourite documentaries about sports. After that, we get onto the week’s other releases, which include the amusingly re-titled comedy “Bad Neighbours” and Hayao Miyazaki’s period swansong “The Wind Rises,” which prompts a discussion of the greatest biopics ever made, and a face-off between “The Pianist” and “Schindler’s List”. With only three films, we have plenty of time to anticipate next week’s double-dose of Elizabeth Olsen, and venture on a host of digressions, discussing the quality of the cinema of 2004, and what exactly constitutes a “performance piece.” Elsewhere, Pete uncorks a rather vicious burn on Hailee Steinfeld, Zac Efron makes Cal feel guilty and shallow, and there’s a proposed overhaul of the segments which may see Emma and Melvil banished from the podcast. Scandal!

Closing Segment: Our take on Hayao Miyakazi’s “The Wind Rises,” and discussing our favourite biopics, with some other random asides!