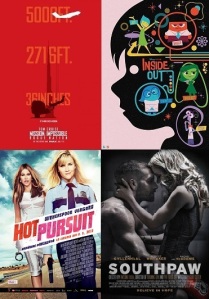 We’ve spent the past two weeks topping up the tan, but now we’re back with an episode packed full of criticism, as we turn our attention to the most anticipated film of the year, Pixar’s “Inside Out”. We also assess whether Tom Cruise has still got it, in the latest instalment in the Mission Impossible franchise, “Rogue Nation,” while Cal reviews heavy-going boxing fable “Southpaw,” and Reese Witherspoon and Sofia Vergara in ramshackle comedy “Hot Pursuit.” Meanwhile, we turn our attention to the start of the awards season by digging into the Venice and Toronto Film Festival line-ups, touching upon (among other things) Charlie Kaufman’s return to directing and Tom Hooper’s latest piece of Oscar bait. Plus there’s news of Mads Mikkelsen’s unlikely collaboration with a pop star, Alicia Vikander’s prolific year in film continues, and Xavier Dolan’s foray into the world of voice-over acting comes as somewhat of a surprise.

Opening Segment: Discussing the line-up for this year’s Venice Film Festival, featuring anticipation for films from Charlie Kaufman, Atom Egoyan, and Pablo Trapero, plus we discuss some of the awards hopefuls playing at this year’s film festival in Toronto!

Outro Music: Odyssey, “Inside Out”

Episode 148: The No in Pacino [San Andreas; Man Up; Danny Collins]

This week begins with a lengthy opening, featuring discussion of Sofia Coppola’s travails with the studio system, a long overdue film on the Suffragette movement, and a retrospective of Al Pacino in the wake of the release of “Danny Collins.” There are also reviews of disaster action movie “San Andreas,” Iranian vampire flick “A Girl Walks Home Alone At Night,” and romantic comedy “Man Up,” which propelled us into a digression concerning the politics of internet dating. Elsewhere, Cal is forced into a Neil Diamond-style rendition, a certain Antipodean singer narrowly avoids a dreaded Ehle Omission, while Pete disses the vocal talents of a British redhead, much to Cal’s chagrin.

The week’s news: Some Birthday wishes, plus news on Sofia Coppola’s exit from “The Little Mermaid,” the opener of this year’s London Film Festival, and a chat about Al Pacino!