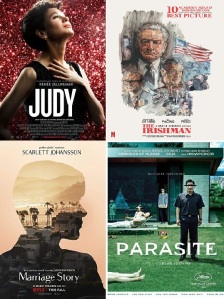 [2:03:24]
You can Listen online
or Download Here
(Right Click… Save as)
It’s Episode 170 of In the Mood for Podcast!
It’s been four years, but Cal and Pete are finally back together in a bumper two-hour episode that features lots of discussion of the Oscars, and that history-making win for Bong Joon-Ho’s “Parasite”. We reveal our feelings about the film, while Pete gets his statistician head on as we detail some interesting Oscar trends that have emerged in the past decade. Elsewhere, we chat about the length (among many other things) of Martin Scorsese’s “The Irishman,” troubling preconceptions of Renee Zelwegger are tested when we review “Judy,” while we discuss an unexpected best-in-show in “Bombshell”. Five acting nominations between “Marriage Story” and “The Two Popes” get us discussing the worthiness of this year’s crop of nominees, while a snub from times-gone-by sets us off on a digression on the 1990 Best Actor lineup. In other news, Pete finally saw the end of “Wolf of Wall Street,” Cal has a bee in his bonnet about flashbacks, and Pete saves a scathing fast food-related diss until late in the day.

Opening Segment: A quick look back at the last four years, and although Pete’s cinema going has taken a hit, he offers some of his notable watches since we last did an episode together!

Preconception Corner (including a listener question from Ibbi!)

Intro Music: Thin Lizzy, “The Boys are Back in Town”
Outro Music: Marmalade, “Reflections of My Life”