Episode 141: The Sprinkler of Sadness [Cinderella; Get Hard; Seventh Son] 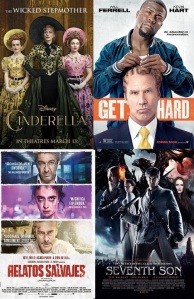 This week’s reviews include medieval fantasy adventure “Seventh Son,” the latest incarnation of the fairy tale “Cinderella,” and Argentinian Oscar nominee “Wild Tales,” which is courting controversy in the wake of some bad release timing. Elsewhere, we discuss comedy caper “Get Hard,” which already had preconceptions reeling from Tim Robey’s assault on its homophobic tendencies, plus we chat about the horrendous title of Russell Crowe’s upcoming directorial debut feature, and the bizarre nature of Jeff Bridges’ vocal work. Meanwhile, the memory of Marlene Dietrich lives on the attire of one of this week’s performers, Ed Sheeran’s Australian exploits has Pete hoping he’ll stay there, and why is nobody mentioning the Grimm brothers’ glaring plot hole? Cal’s off to New York next week, so we’re taking a fortnight hiatus, but hopefully we’ll return with news of Pete’s first four-star film of the year.

[1:18:54]
You can Listen online
or Download MP3
(Right click… save as)
It’s Episode 88 of In the Mood for Podcast, a British-based film podcast hosted by Calum Reed of Ultimate Addict and Pete Sheppard of In the Mood for Blog.
In this week’s episode we deviate between the worlds of arthouse and animation, as we review critical cartoon hits “The Lego Movie” and “Mr. Peabody & Sherman,” gay murder mystery drama “Stranger By the Lake” and moody vampire tale “Only Lovers Left Alive,” but was everything awesome on all fronts? And then we launch into some Oscar predictions in 21 of the 24 categories, discussing if the year might echo 1972’s Godfather vs. Cabaret tussle, and whether justice can prevail in the Supporting Actress race. We ponder whether anyone will remember what Tilda Swinton won her Oscar for, why Pink might be the hottest colour at the ceremony, Tom Ford’s idealisation of street corners, and the revelation that dwarf-throwing is still prevalent in modern society. Pete’s Dad also makes a brief cameo, although he didn’t get a chance to enlighten us on the virtues of Lindsay Lohan and Dolly Parton.

Closing Segment: Our predictions for this year’s Academy Awards!