Tag Archives: a most wanted man

Episode 153: The Dash for Viv [Song of the Sea; Dear White People; Housebound] 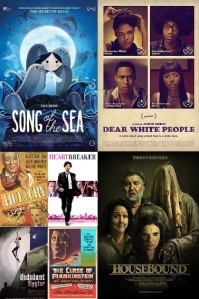 This week we’re going full-blown indie, with reviews of Irish animated adventure “Song of the Sea,” and New Zealand-set horror comedy “Housebound,” while the racial politics of college-set satire “Dear White People” leave us with conflicted thoughts. We get off to an overwhelmingly positive start, as July’s instalment of the Red Light District features a Colombian festival hit and a Hammer Horror classic, and leads to digressions about the Best Actress Oscar race of 1963 and the richness of 2013’s world cinema. Elsewhere, there’s a competition which could see you win DVDs of a Bresson classic and a recently restored Ealing Studios pic, plus Pete brings up an interesting anecdote involving Laurence Olivier and Vivien Leigh.

Red Light District: Our regular feature in which we discuss non-new releases we’ve seen from the past month, featuring discussion of “The Curse of Frankenstein,” “Heartbreaker,” “Hue and Cry,” “A Man Escaped,” “Manos Sucias,” “A Most Wanted Man,” and “Out of the Clouds”!

The Pootsition
The Garrett Gauge

It’s our last episode of 2014 so we take the opportunity to celebrate the best films we’ve reviewed on the podcast this year, and our favourite performances, which includes a surprising Supporting Actress win from Pete. This week’s reviews include the Biblical epic “Exodus: Gods and Kings” and Angelina Jolie’s audacious survival tale “Unbroken,” while Pete caught Jimi Hendrix biopic “Jimi: All Is By My Side.” We discuss fradulent artist drama “Big Eyes,” starring Amy Adams, while we assess Julianne Moore’s bid for a long overdue Oscar in heavy-going Alzheimer’s tale “Still Alice.” Elsewhere, the death of the last remaining acting Oscar winner from the 1930s resurrects a common complaint, we scrutinize this year’s Foreign Language Oscar race some more, there’s a Razzie-level performance in one of this week’s films, and the podcast is interrupted by the children and dogs in Cal’s packed household.

Closing Segment: Discussing our favourite films and performances reviewed on the podcast in 2014!

Shag, Marry or Kill?
The Olsen Factor
The Isaac Range
Outro Music: Baha Men, “Who Let the Dogs Out?”

Episode 115: The Torvill and Dean Years [A Most Wanted Man; Pride; The Boxtrolls]

This week’s episode tops the 100-minute mark, as we take (a lot of) time out to discuss the many memorable films from 1999, revealing our top tens, and weighing in on some grandiose performances from the year. We also tackle some new releases, with Pete dishing all on the bonkers animation “The Boxtrolls” and Cal revealing how proud the LGBT community should be of “Pride”. We review Norwegian festival circuit favourite “Blind” and Anton Corbijn’s Hamburg-set thriller “A Most Wanted Man,” which features the final leading performance from Philip Seymour Hoffman. Tune in to find out what Pete has spent an excessive amount of money on this week, why Dominic West’s dancing is under scrutiny, and the sheer volume of affection extended to Rachel McAdams. Elsewhere, we discuss the unstoppable Jack O’Connell, Pete’s interruptions during Cal’s review of “Pride” leads to strikes being called, while this week’s Christie Clanger concerns the presence (or lackthereof) of Julie Delpy.

Closing Segment: Our take on the cinema of 1999, featuring discussion of films such as “The Road Home,” “The Talented Mr. Ripley,” and “Rosetta,” and performances by Russell Crowe, Reese Witherspoon, and Cameron Diaz!