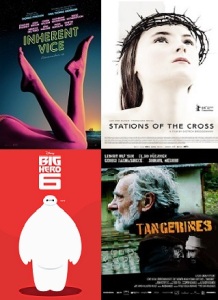 Episode 133: Finger on the Pulse

This week we’re back with a diverse array of films, from the artistic flourish of animated science fiction yarn “Big Hero 6,” to the war-torn meditation of Foreign Language Oscar nominee “Tangerines,” the review of which led to some rather distasteful fruit-based innuendo. Elsewhere, we were both in the queue for the second collaboration between Paul Thomas Anderson and Joaquin Phoenix, the stoner detective tale “Inherent Vice, while Cal’s long-standing perplexity with religion was tested when he sat down to watch Berlin Film Festival runner-up “Stations of the Cross.” Meanwhile, a big news segment sees us discuss the possibility that the French aren’t all that snobby, an unexpected coming out story leads us into a discussion of the 1972 Oscars, Imogen Poots is bested by the unlikeliest of characters, and Pete likens Judy Greer’s association with Jason Reitman to self-flagellation.